The documentary film “Hate and Reconciliation” was shown at the ReelHeART film festival in Toronto, Canada 2017. The film was nominated for Best Documentary and Best Editing. The jury awarded the film with an Honourable Mention.

“Hate and Reconciliation” is a documentary about the worst disaster that has happened in Scandinavia in modern times. In 1998, a few young guys arranged a party in Gothenburg, Sweden. Four guys who did not get into the party wanted revenge and built a fire to spoil the party. The fire spread explosively and 63 young people died and more than 200 were injured. 15 years later we meet some of those who survived the fire. “Hate and Reconciliation” is the story about how to survive and how to keep living, when you have lost a sister or a brother or your best friend.

Israel’s ambassador to Sweden, Isaac Bachman, is trying to stop the screening of “The dead still have a name” for school classes in Gothenburg. He has written an open letter to the chairperson of the municipality Anneli Hulthén with copies to the Secretary of State Margot Wallström and to the Minister of Education Gustav Fridolin, where he demands that the film be stopped on the grounds that it is antisemitic. He claims that the film makes comparisons between the Holocaust and Israel’s politics and that it is pushing an antisemitic idea that there are good and evil jews.

This is of course nonsense. But as usual critique against Israel’s government is met with accusations of antisemitism.

Read more below (in Swedish):

Israel’s Foreign Ministry recently declared Sweden to be the most anti-Israeli country in Europe.

This was reported in Yedioth ahronoth, one of Israels biggest newspapers. They provided four examples:

1. The Swedish government, which has recognized a Palestinian state and has not condemned any of the recent terrorist attacks against Israel.
2. The Swedish church, “which systematically works against Israel.”
3. SAS, which will no longer be flying to Israel due to political instability.
4. Bo Harringers documentary THE DEAD STILL HAVE A NAME: “An anti-Semitic Swedish film titled The Dead Still Have a Name, produced by a Swedish organization that organizes flotillas to Gaza, which draws comparisons between Israel’s actions and the Holocaust. The movie’s protagonist is a Jewish doctor named Henry, who heads the flotilla organization. The city of Gothenburg has decided to include the film as part of its school curriculum. So far, it has not been broadcast on television, but only screened privately.”

Link to the article at Ynetnews:

The description of the film is filled with inaccuracies. The story of Henry Ascher is of course not antisemitic, the film is not produced by Ship to Gaza but by Bo Harringer, it does not draw comparisons between Israel’s attacks on Gaza and the Holocaust, Henry Ascher is not the head of Ship to Gaza and the film is not a part of the school curriculum, only a single screening at Hagabion in Gothenburg. The only accurate part is that SVT still haven’t agreed to show the film.

Our film The dead still have a name about the Swedish paediatrician Henry Ascher who travels with the Freedom Flotilla will be shown at Marbella International Film Festival where it will compete for “best documentary”. The festival will take place 7th to 11th October. 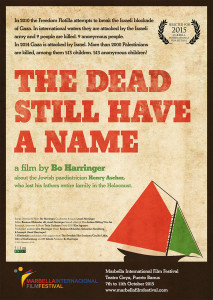 In the early 90s the Gothenburg Film Festival held a large number of interviews with visiting directors from around the world. These interviews were filmed by Bo Harringer from Filmateljén who then saved the tapes for over 20 years. Now these fragments of movie history will be dusted off and published at drakenfilm.se.

The documentary by Bo Harringer about the jewish pediatrician Henry Ascher is now being distributed by Folkets Bio in cinemas around Sweden.

Premier dates:
8 May in Stockholm, Göteborg, Malmö, Lund, Umeå, Luleå and Västerås
12 May in Uppsala
14 May in Växjö, Örebro och Helsingborg
More locations to come.

On January 25 the film about Henry Ascher will premiere at the Gothenburg Film Festival. The first screening will be at Bio Roy.