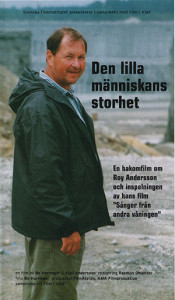 For three years the documentary filmmakers Bo Harringer and Kjell Andersson, who is Roy’s brother, have followed Roy Andersson and the making of his film “Songs from the second floor”.
The film won the jury’s price at Cannes filmfestival 2000 and has, since its premiere, created a lot of attention and debate. In this “behind the scenes” film we take a look at some of the more controversial key-scenes, which in a clear way show Roy Andersson’s critical view of society. But the film also shows his view on art, culture and music. Especially interesting is his cooperation with the former ABBA member Benny Andersson.