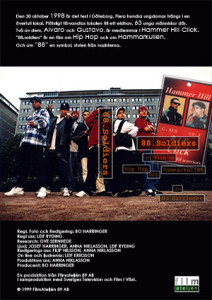 “88.Soldiers” is the story about Hammer Hill Click, a bunch of young immigrants living in Hammarkullen – a segregated suburb, with a bad reputation, just outside Göteborg. It´s about hip hop, a global movement where oppressed young people give voice to their frustration. It doesn´t matter what religion you belong to, nor where you come from. Hip hop is ultimate togetherness.

In the fall of 1998, Hammer Hill Click becomes well-known. They get engagements at several hip hop festivals and their first CD is released. Then disaster strikes.

By midnight on All Saints´ Day, a discoteque catches fire and 63 young people lose their lives. Among the victims are two of the members of Hammer Hill Click.

“88.Soldiers” is about togetherness, about hope and hell, joy and sorrow. It´s about rasism and about “88” – a symbol stolen from the Nazis.

in collaboration with Sveriges Television AB and Film i Väst.