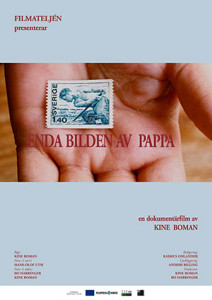 “I have never met my father, this is my only image of him.” says Monika and shows the stamp. He is a saami and has worked as a logdriver. That is all she knows about her father.

She has fingered the stamp a thousand times wondering… Why is her father on a stamp? Who is he? Is he alive? Is she also saami? And why hasn’t she learned anything about the saami culture? Monika has made up her mind. She will try to find her father and her saami origin.

Kine Boman:
“When we started filming I thought about why I’ve never learned about the saami people? Why have I never read about the indigenous people of Sweden in any schoolbook? At the same time, I was worried about not finding Monika’s father in time, since he is old…

I had no idea about what or who we would meet. I hope and believe that the film will spread warmth and knowledge to many people.