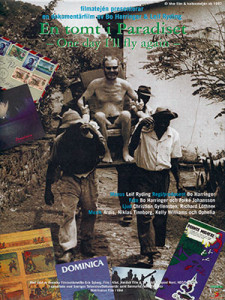 At an old plantation, in a distant valley, on a small island in the West Indies, lies a man in an iron bed. The bedposts are placed in old tincans filled with kerosene. An old grammophone stands in the corner, with the pickup scratching the innermost groove of a dusty record.

This man, the son of a known pacifist, became a soldier and international armsdealer. Among other things, he helped the swedish democratic goverment to sell weapons to a dictatorship in Latin America.

This man had a dream. The eternal dream about a paradise lost. One day, he found his paradise…

Listen to the main theme from the film by Ardis: