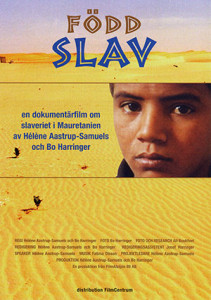 Contrary to most other societies in the world, in Mauritania traditional slavery is still in practice. A law abolishing slavery in 1981 has not been followed by any practical measures by the regime. In 1981 Anti Slavery Society estimated the number of slaves in Mauritania to be about 90 000.

According to tradition the child of a slave woman belongs to her master. From the time a child can walk and talk it’s put to work and can also be given away to others by the master.

In the film “Born Slave” we meet Bilal, sixteen years old. When he was only two, his mother ran away and left him with the master. Now he has run away himself and found his mother in the slums of the capital Nouakchott. Bilal, his mother Shaba and his aunt M’Barka tell of their lives as mistreated and humiliated unpaid workers. “Your Paradise lies under our feet” say the masters who use religion to frighten their slaves into submission.

“Born slave” is the first film ever made about the slavery in Mauritania. The swedish filmmakers succeeded in entering Mauritania “as tourists” and secretly filming the slavery. Mauritania is the only country in the world where a slave class still exists. Humans are owned by a slave master and are forced to work without any compensation. The children are separated from their mothers at the age of one and are brought up as slaves.

The film is screened throughout the world. For example in South Africa in Cape Town and Johannesburg, at several universities, schools and different Township communities.

“Born slave” caused commotion when it was screened in Washington, USA. Agents from the Mauritanian embassy showed up and after some disturbance, security personel had to turn away the embassy agents.

Amnesty International use the film in their activity.