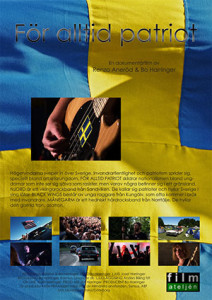 In recent years the interest in “Swedish culture” has increased, especially among young working-class people of Swedish descent. A great deal of the patriotism is racist and Nazi. But a part of the patriotic movement claims to be non-politic and non-racist.

NJORD is a viking-rock band. They call themselves patriots and honour Sweden with their songs. BLACK WINGS is a group of young Yankee-car enthusiasts, that sometimes have conflicts with immigrants. MÅNEGARM is a pagan-rock band. They worship the Aesir.

“Patriot for life” depicts the nationalism among youths who do not view themselves as racists, but who are often viewed as such by others.

Listen to the song För alltid Patriot (Patriot for life) by Njord.

A production by Filmateljén 89 AB
with support from Allmänna Arvsfonden, Levande historia/Göteborg, ABF and Sensus