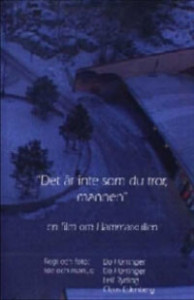 “It’s not like you think, man” is a documentary about Hammarkullen, a suburb to Gothenburg with a bad reputation. It’s a film about joy and sorrow, pride and despair and about the solidarity and cooperation among the people.

“It’s not like you think, man” was shot in 1998 during a period that contained both the joy and happiness of the Hammarkullen carnival and the deepest despair after the fire disaster at Halloween, where 63 youths were killed in a discoteque fire.